In this article we are going to find out just how much does it cost to run an old car. 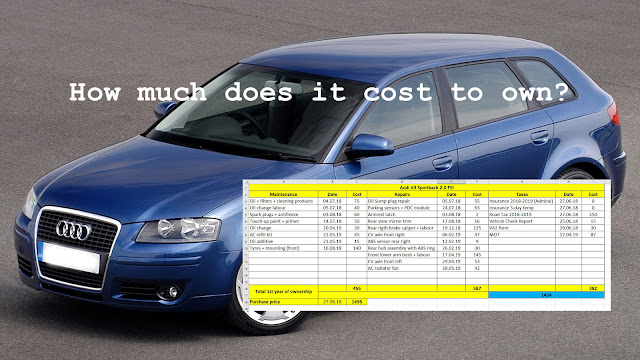 It's been almost a year since I've bought my bargain Audi A3 and it's time to crunch some numbers.

I've tracked all of my A3 related expenses from day one with the help of this colourful spreadsheet. 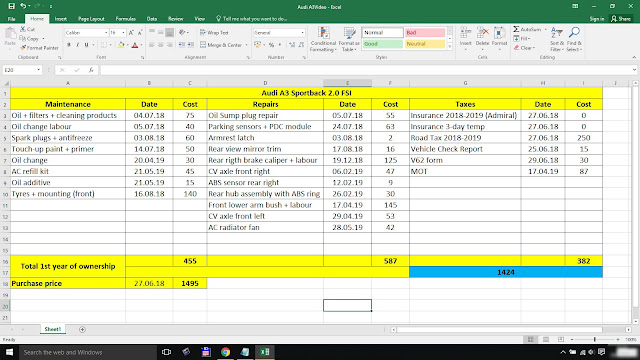 I have split said expenses in 3 main categories:

- maintenance: this is just regular maintenance that you'd have to do on any car
- repairs: self-explanatory really, everything that was broken and needed fixing during the last year
- taxes: in this category I have all the expenses that are necessary to have the paperwork in order.

First up in the maintenance department an oil change + filters + other cleaning products like leather conditioner and what not for £75.

This first oil change was done by a garage as it tied in to a necessary repair so £40 for labour.

Spark plugs and antifreeze change £60, did it myself.

Touch-up paint and rust protection primer to fix stonechips and deep scratches for £50.

Another oil change, this ties in to my oil leak woes (see the videos). Only £30 this time as I did the job myself.

AC refill kit, almost a waste of money as you'll see in a future video but money spent nonetheless.

And the big expense in this category. A pair of new tyres. When I got the car the 2 rear tyres were so badly worn that it would have been outright dangerous to drive the car like that. £140.

Repairs. Unavoidable things with any old car and the stuff of nightmares for most people.

The first job was a stripped sump plug, necessary fix to perform an oil change. The previous owners were not concerned by this as evidenced by the state of the oil in the engine. This job was performed by a garage as it needs specialised tools and skill.

Parking sensors not working, probably for years by that time. I've bought 4 new sensors and a used PDC module. Painted and fitted them myself. The old module turned out to be working just fine, but since I didn't have the VCDS at the time I couldn't diagnose the problem properly. £63 for the lot. The used module was £17 off E-bay.

Broken armrest latch for only £2. It took 2 weeks to arrive from China.

A missing rear view mirror trim. How they managed to lose that I cannot imagine. £16 brand new, factory original. Not available anywhere else.

A sticky rear brake caliper + labour. Parts were about £65. Changed by a garage as I didn't have the necessary tools at the time.

Next is a CV axle on the right hand side. Was noisy and had quite a bit of play in it. £47 and changed it myself. There is a video on that.

There is also a video about fixing the ABS. Speed sensor and tone ring replaced for about £40.

The most expensive repair to date was a lower arm bush replacement. This was actually an MOT failure. Parts + labour were £145 at a garage. I could not have possibly done this myself at home.

Left CV axle replacement came next. It wasn't as bad as the right one but not good either, so for £53 I replaced it.

The last fix in this first year of ownership was the secondary radiator fan. This fan is used by the AC and the reason I bought the AC refill kit. £42.

The third and final category of expenses: taxes.

Right of the bat I've left the Insurance fields empty because insurance varies so wildly from driver to driver it wouldn't make any sense in this context.

Road tax - this is car related of course and for this car was £250/year.

Before I bought the car I did an online vehicle check on Autotrader for £15.

V62 form or application for a V5 was £30, including postage.

And finally MOT ended up £87 as after the initial failure I've had the MOT done at the garage that did the repairs. So I paid more but it was a lot more convenient time wise.

Is that a lot? Well it certainly is when compared to what I paid for the car: £1495.

The number of repairs needed seems high but I had fun doing most of them, made a number of videos and generally learned a lot of new things. The question for me is: could I have bought a better car if I've added the £600 spent on repairs to the original purchase price of the car. Well... maybe if I was lucky, but most likely not. I've seen many old cars over the years and all of them have a long list of small issues that the owners are reluctant to fix, until the car leaves them stranded or fails the MOT or whatever. More often than not they just decide to sell the car. And that is the car you're looking to buy.

Another thing I want to point out is that everything broken on the car (and I do mean everything) was broken on the day I've got it. Some things have been like that for years.

There are a couple of caveats:

1. I enjoy doing the research, figuring things out so it's not an inconvenience for me.

2. I did most of the work myself, if I had to pay someone else to do every little job on the list, the costs would have easily tripled.

But that begs the question: Is there a cheaper way of owning a car? What about leasing a new car? 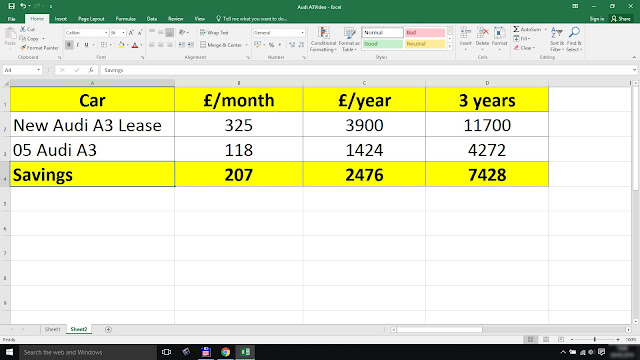 The average monthly lease on a car in the UK, according to some online article I've found, is £252 + yearly servicing that you have to pay. So there you go: for twice the money you can have a new car and 0 hassle as far as repairs. But that is the average lease, what about a new Audi A3 Sportback? As it turns out that is significantly more: £325/month with 3 payments in advance and bound by a 3-year lease contract.

That is almost 3 times more than the £118/Mo I've spent. On top of that you don't have the freedom of choice as you have to play the game for the duration of the lease weather you like it or not.

Looking at these figures as monthly payments don't tell us much so let's have a look at the big picture.


Net savings of £7428. Let's assume the worst case scenario, that in 3 years you drive the car completely into the ground and lose all resale value: you still save almost £6000 compared to leasing. Also bear in mind that leased cars must have comprehensive insurance and on a new car that is not a trivial amount!

So there you have it in numbers, hopefully this will help someone make the right decision for them. As far as I'm concerned I'm willing to put up with a bit of hassle and not pay the cash, for the time being anyway.

But that statement begs yet another question: how much hassle did I had to put up with in the last year?

Let's start with the fact that the car never failed to start, it has never left me stranded. I've driven it near and far, very far with 0 problems on the road.

None of the defects had any immediate impact on driveability or safety so I carried out the repairs in my own time and rhythm.

The car was in a garage 3 times. Once for half a day (they gave me a courtesy car) and twice for 2 hours each.

All other repairs were done in my free time and the worst ones took about 3 hours.

That's it for today's.