My Audi A3 had a long running issue with the ABS. Namely it worked fine and all, except when you went over say 50 mph or so the light suddenly came on, along with the ESP and it registered a fault code. To fix this I had to stop, turn the engine off, then back on and after a few yards the light went away and everything was great. Until I reached higher speeds again. If I only drove in city traffic it stayed off for weeks on end. And it wasn't always 50 mph, sometimes it was 60, sometimes 70. 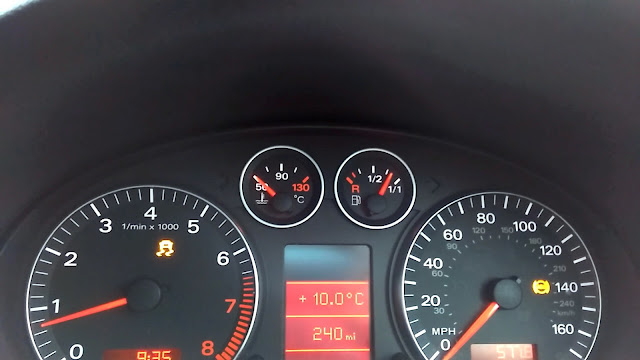 Because, clearly this is not how things should work, I set about fixing the problem. A quick scan with the VagCom (which is a VAG Group specific diagnostic tool, consisting of an OBD cable and software, VCDS) revealed, just as I suspected, a faulty reading on the rear-right speed sensor. The VCDS proclaimed that the fault is intermittent and the signal is implausible.
Easy fix, I thought, and off to E-Bay I went and ordered a new ABS speed sensor. As soon as it arrived I commenced the process of replacing it. By the end of that process I was reminded, yet again, that there is no such thing as an easy fix on an old car.

Here are the steps:

Obviously safely jack up the car, put it on jack stands, leave it in gear. Chock the wheels as you won't be able to use the handbrake!

Remove the wheel on the culprit corner and straight away remove the brake caliper. The easiest way to do this is to remove the slider bolts (13 and 15mm spanners needed) and then the pads. Just leave the caliper hanging on one side. 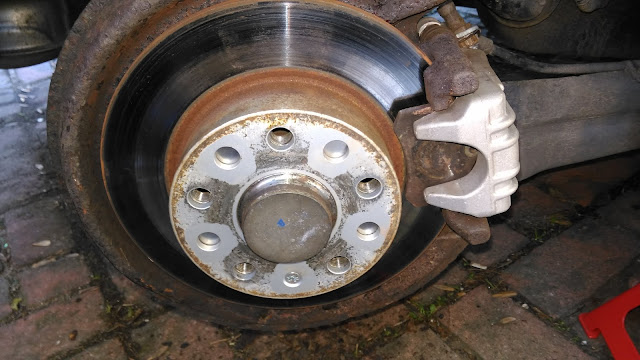 Now stick your head behind the hub with a light and locate the sole bolt that holds the sensor in place, it should easily come out with a 5mm Allen key. Remove the wiring plug form the sensor. 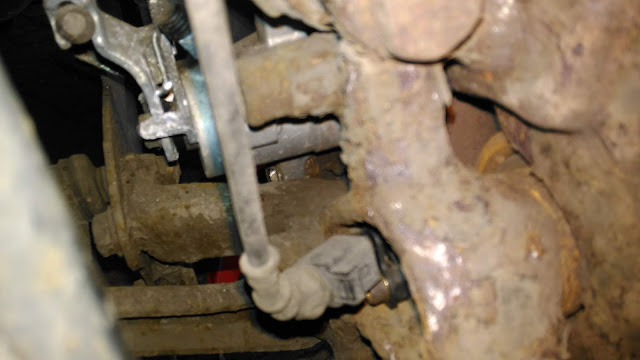 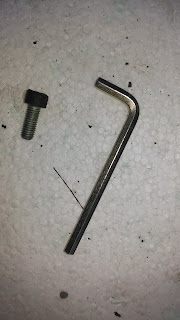 The sensor itself will not simply pop out, partly because everything is old and crusty and partly because it has plastic locating fins that were wedged in when it was installed (you'll understand this when you install the new one). 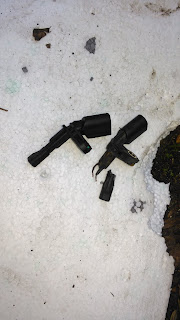 Remove the brake disc, held in place by one Philips head screw, and now you'll see the end of the sensor sticking out. Break off this end with a pair of pliers, and with a suitably sized screwdriver, hammer the sensor out backwards. You can easily do this by aligning one of the bolt holes on the hub with the sensor. 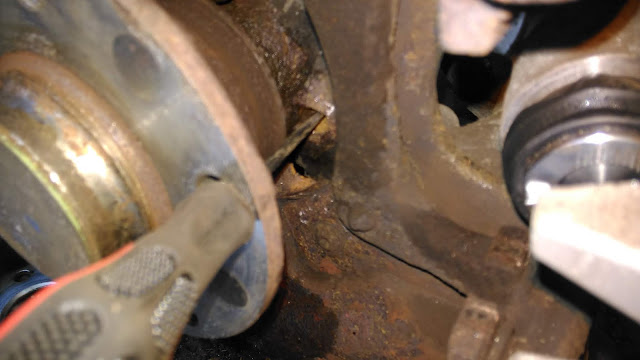 Push in the new sensor from the rear, bolt it in place and connect the plug. Put back the disc and the caliper and you're done.

Not so fast! This would be way to easy...

Now that I had the whole thing apart I've found the real culprit. The A3 (8PA) uses a magnetic ABS ring on the hub, rather than the old-fashioned toothed wheel. This magnetic ring is pressed onto the back of the bearing assembly and it rotates with it in front of the speed sensor. In my case this ring was deformed, likely by rust or poor fitment and as it spun it touched the sensor, shaving of bits of plastic from the tip of the sensor and bits of magnetic material from itself. That's why it was giving out an 'implausible' signal as the computer said.

So to prevent the new sensor being destroyed by the damaged ring I poked around the edges of the ring with a screwdriver and shaved off whatever it was left of the magnetic material, and off it came by merely touching it. The conclusion: I need a new magnetic ring as well. 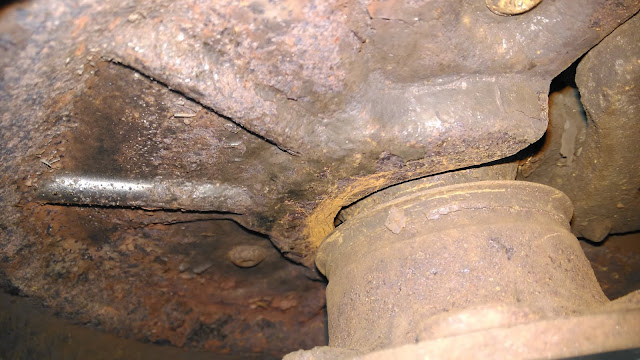 You can buy just the ring, but since press-fitting it properly to the back of the bearing assembly requires specialized knowledge and possibly some tools, and if you do it wrong and it wobbles or comes off, you're back to square one, it's probably better and easier to replace the whole bearing assembly.