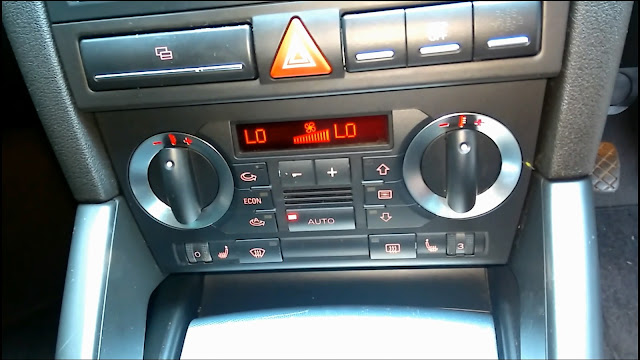 The air conditioning in my car was working but with one interesting peculiarity: it wasn't blowing cold as soon as I started the engine, rather it started getting colder and colder as the car was picking up speed. This was getting annoying especially if I parked the car out in the sun.


Like most people, I assumed that the system was low on charge so I bought a handy refill kit off E-bay. The kit came with a bottle of refrigerant gas and a pressure gauge which is actually a neat thing to have since you can check if you actually need a recharge. On a side note: an AC system that is in good working order will never need a so called recharge. If you're low on gas you have a leak that needs to be plugged first. The gas itself does not simply loose it's cooling properties. Just think about your fridge; when was it recharged the last time?!

With pressure gauge in hand and following the instructions that came with it I quickly established that no recharge was needed, in fact the pressure on the low pressure port was well above the optimum. I googled high AC pressure and lo and behold on a forum somewhere an intelligent answer: high pressure measured on the low pressure port (the fat pipe) could be caused by a faulty cooling fan!
But I'm thinking, my fan works, the engine temperature is always spot on and I've even heard it running on occasion.

So I break out the VCDS and give the whole thing a scan: as you can see the climate control has no fault codes, but the engine has one: Radiator fan 2 (V177). 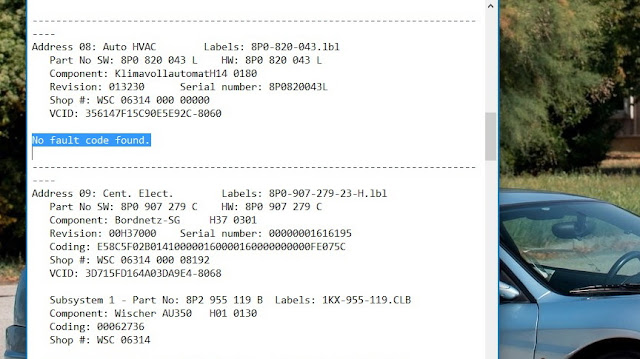 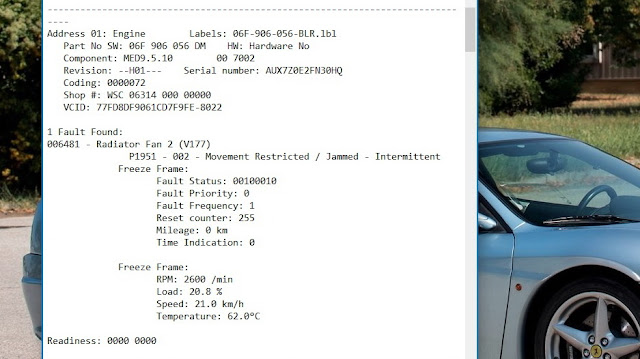 As it turns out the car has 2 cooling fans on the radiator. The big one is for the engine coolant and like on most cars it has 2 speeds. This is what I occasionally heard running. The second, smaller fan is right  behind the AC condenser and is supposed to be running whenever the climate control is actually cooling the interior. This explains the symptoms in my car: the AC was cooling only when the car was on the move as only then was air flowing through the condenser (and when the larger fan was running on high speed!).

Visually checking if the fan works is fairly simple on a manual AC system: simply press the AC button inside and the fan should be spinning. On an automatic system this is tricky: you have to set it to its lower most temperature and hope that outside is warmer than that or it will turn on the heat.

Once I established that the secondary fan is clearly not working, I ordered a new one and set about replacing it.

Since we already know that the big fan is working we can rule out any issues with fuses and wiring since the smaller fan receives its power via the larger one which also houses the fan control module. The module could go wrong but that would show a fault code in the ECU. So small fan replacement it is.

This is not a difficult job but it is fiddly as access to the screws is limited.
Jack the car up and safely put it on jack stands. Remove the plastic engine tray.

The fans are housed by a plastic shroud which is attached to the radiator frame with 4 torx head screws. Once the screws are removed, disconnect the wiring. The plug is on the bottom left corner of the shroud. Now the shroud should slide straight down. Depending on what kind of engine you have in your car you may have to remove a few other things like a large coolant hose that is clipped to the shroud on the bottom. Simply un-clip it and gently push it out of the way. On my car I also had to remove the air intake scoop to access the top left screw. 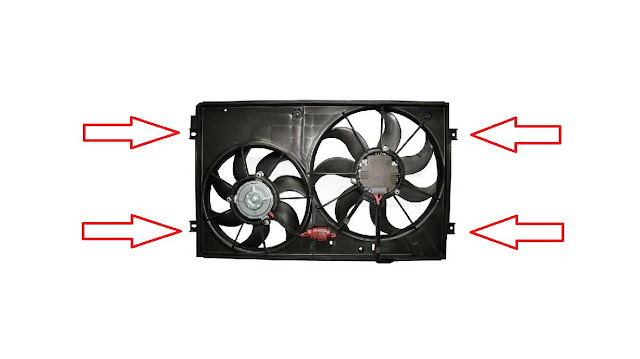 Once the shroud is out remove the 3 nuts that hold the fan in place, unplug the wiring and install the new one. The plug on my new fan was keyed, it had a small plastic tab on one side that the socket didn't have. I simply nipped it off with a pair of wire cutters. A large knife could work just as well.

Reinstall everything in the reverse order and that's it. Now with the AC on both fans should be spinning and... they do.